These tables and graphs provide the confirmed number of COVID-19 tests and cases at Yale University based on data gathered by Yale Health, which serves university employees, students, and retirees, and their dependents, including nearly 80% of Yale faculty and staff. Symptomatic testing is available to Yale Health members who present with COVID-like symptoms. Asymptomatic testing has been offered on a rolling basis as employees and students return to campus: as of August 3, 2020, 19,879 employees and students have been invited to this testing program.

The data on this page do not include members of the Yale community who were tested by health care providers outside of Yale Health. State of Connecticut statistics by county are included to help place Yale’s data into a broader local context.

This graph provides an overview of how many tests Yale has administered through Yale Health by group and testing type, from March 10, 2020 through August 2, 2020. Most tests have been administered to Yale employees, including faculty, staff, and trainees; over half of those tests have been via the asymptomatic screening program (which has been offered to 19,879 employees and students as of August 3, 2020). The majority of tests administered to students, including graduate and professional students, have been through asymptomatic testing; the majority of student tests so far are for Graduate School students invited ahead of the upcoming term. All testing of dependents of Yale Health members and of retirees has been symptomatic testing. 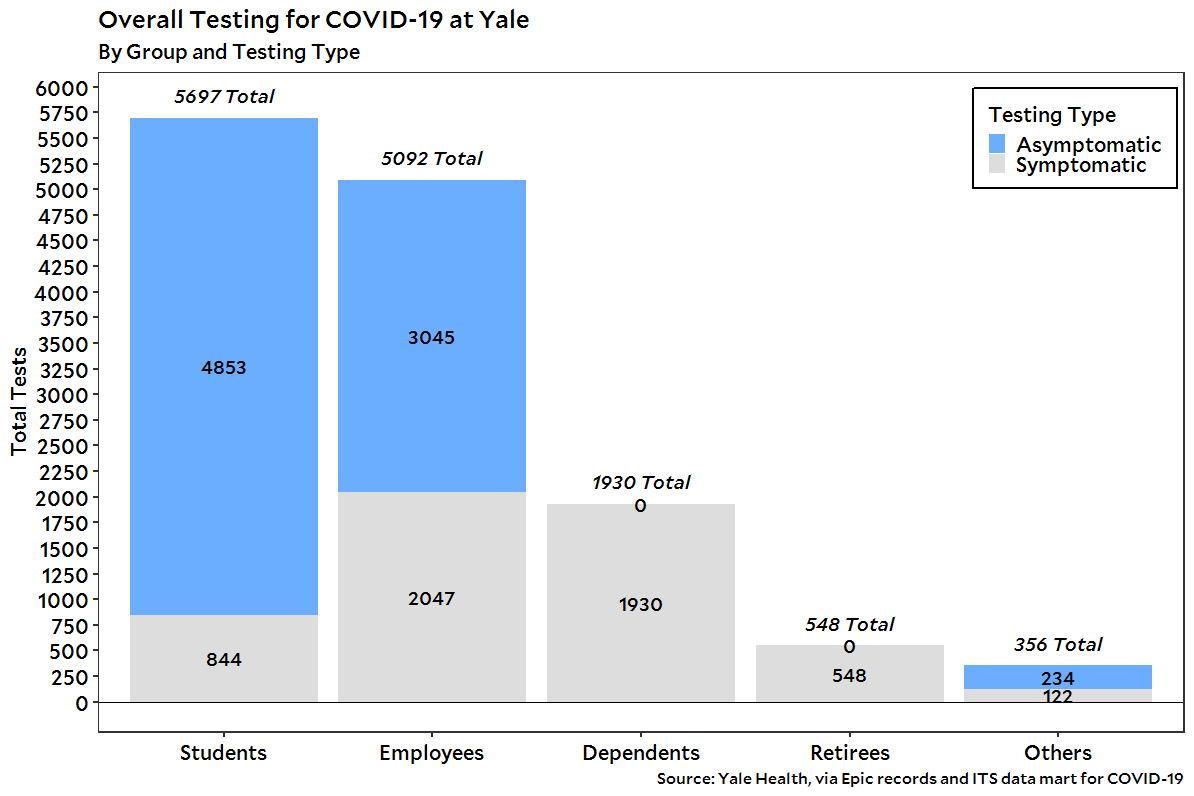 Testing completed by Yale Health. Symptomatic testing refers to testing of Yale Health members (including dependents and retirees) who presented with COVID-like symptoms. Asymptomatic testing refers to gateway and screening testing of Yale students and employees who are present on campus and who certified that they were not experiencing symptoms. The “Others” group includes fee-for-service members of Yale Health and asymptomatic tests that are not linked to a Yale employee or student.
View “Testing at Yale” data in a text-based table

COVID-19 cases at Yale have followed a trend similar to the rise and fall of cases in Connecticut as a whole, albeit at a much smaller volume. Cases rose quickly in late March, peaking in early April with approximately 5 to 6 newly-reported positive tests per day. Cases dropped in May, and in recent weeks the university has been averaging fewer than 1 new case per day. Note that although these graphs include both symptomatic and asymptomatic testing, they do not include members of the Yale community who were tested by health care providers outside of Yale Health. 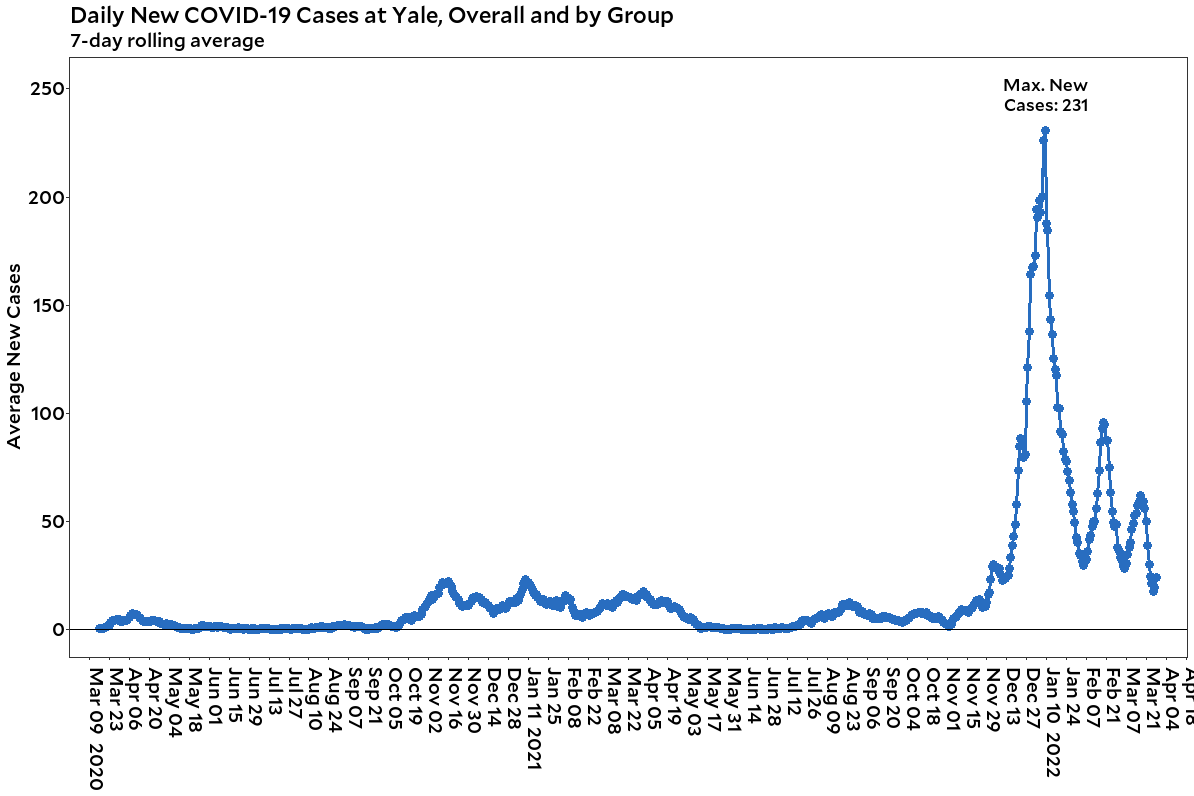 Positivity rate, or the proportion of positive tests out of all COVID-19 tests for a certain group, is a helpful metric for assessing whether there are enough tests being administered among a given population. An early baseline goal based on WHO recommendations was 10% positive tests; on May 12, 2020, WHO recommended 5% as a revised goal. While early positivity rates quickly rose to over 20%, since mid-May positivity rates have fallen to well below 5%. Note that although these graphs include both symptomatic and asymptomatic testing, they do not include members of the Yale community who were tested by health care providers outside of Yale Health. 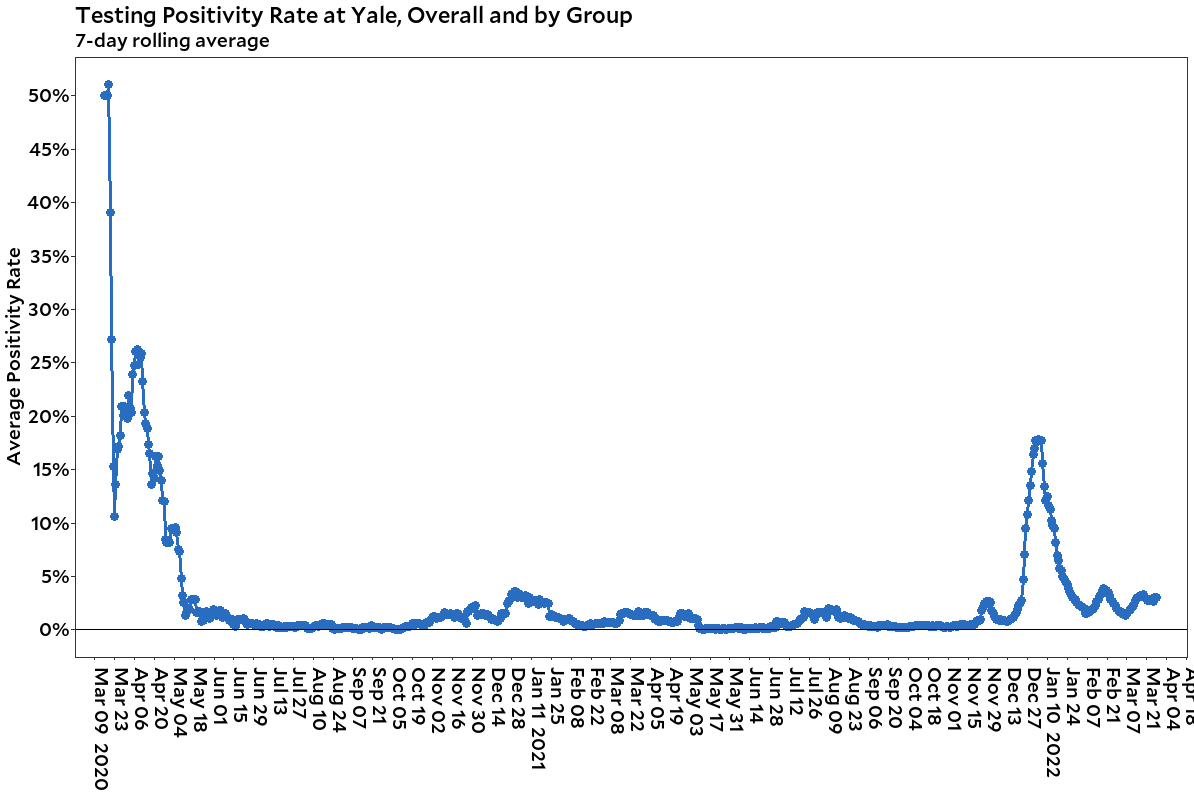 The number of COVID-19 cases in Connecticut grew dramatically from mid-March and peaked in mid-April. Fairfield County experienced the fastest and most dramatic increase in cases, followed by New Haven County and Hartford County; Fairfield County peaked with nearly 500 cases per day in mid-April, as compared to a peak of around 300 cases per day for New Haven County. Since April, the number of cases has decreased, though at a slower rate than the initial growth. 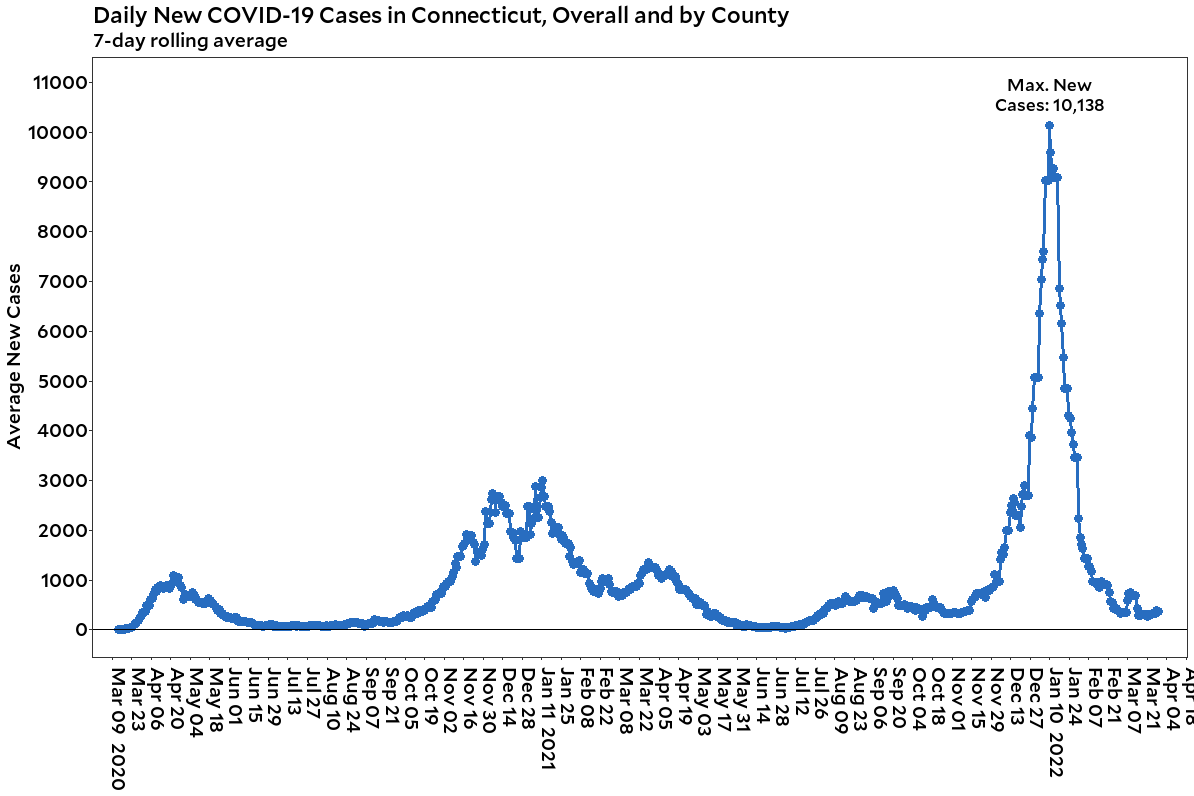 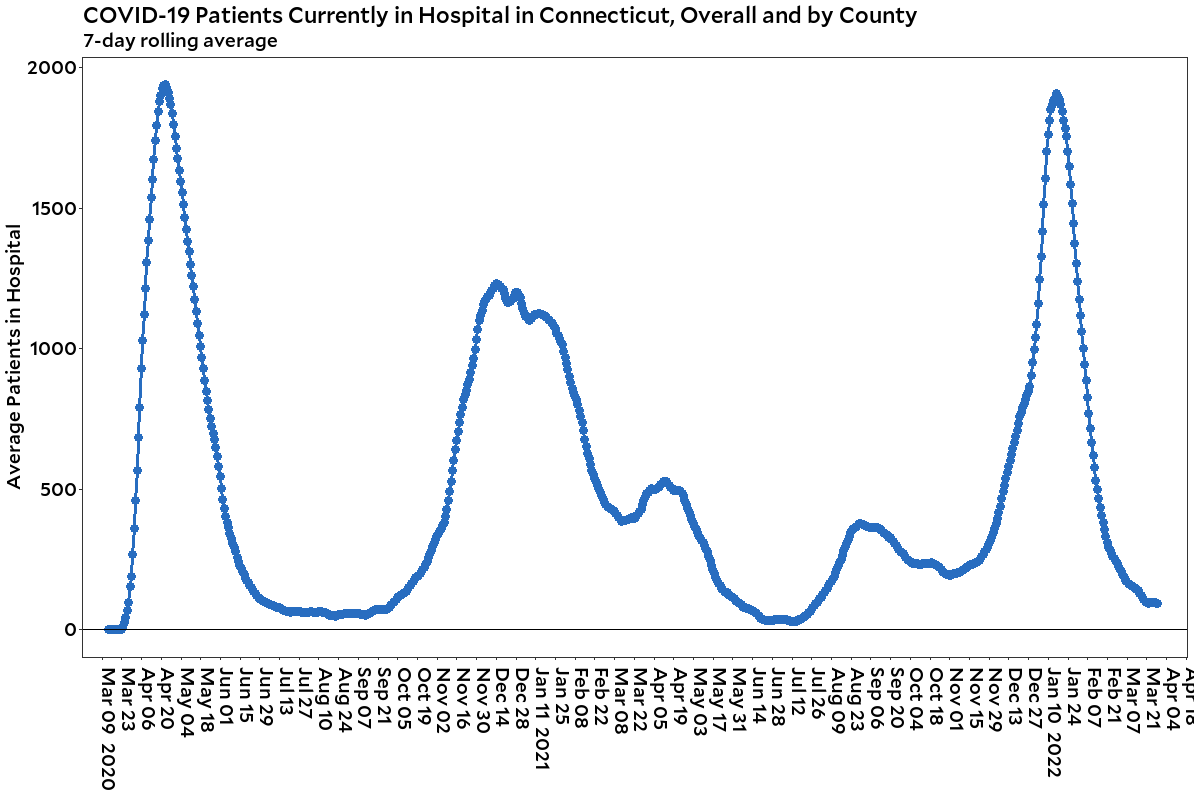 Data primarily sourced from Connecticut Department of Public Health, with data prior to March 24 sourced from the New York Times. Beginning in July, Connecticut began to report data only on weekdays.
View “Hospitalizations in Connecticut” data in a text-based table

Deaths due to COVID-19 increased rapidly in April, peaked in late April in most counties, and have slowly decreased since the beginning of May. Hartford County and Fairfield County experienced a similar death rate due to the virus, both peaking at over 30 COVID-related deaths per day in late April; in the same time period, New Haven County was reporting over 20 deaths per day. As of August 2nd, all counties are reporting fewer than 5 deaths per day due to COVID-19. 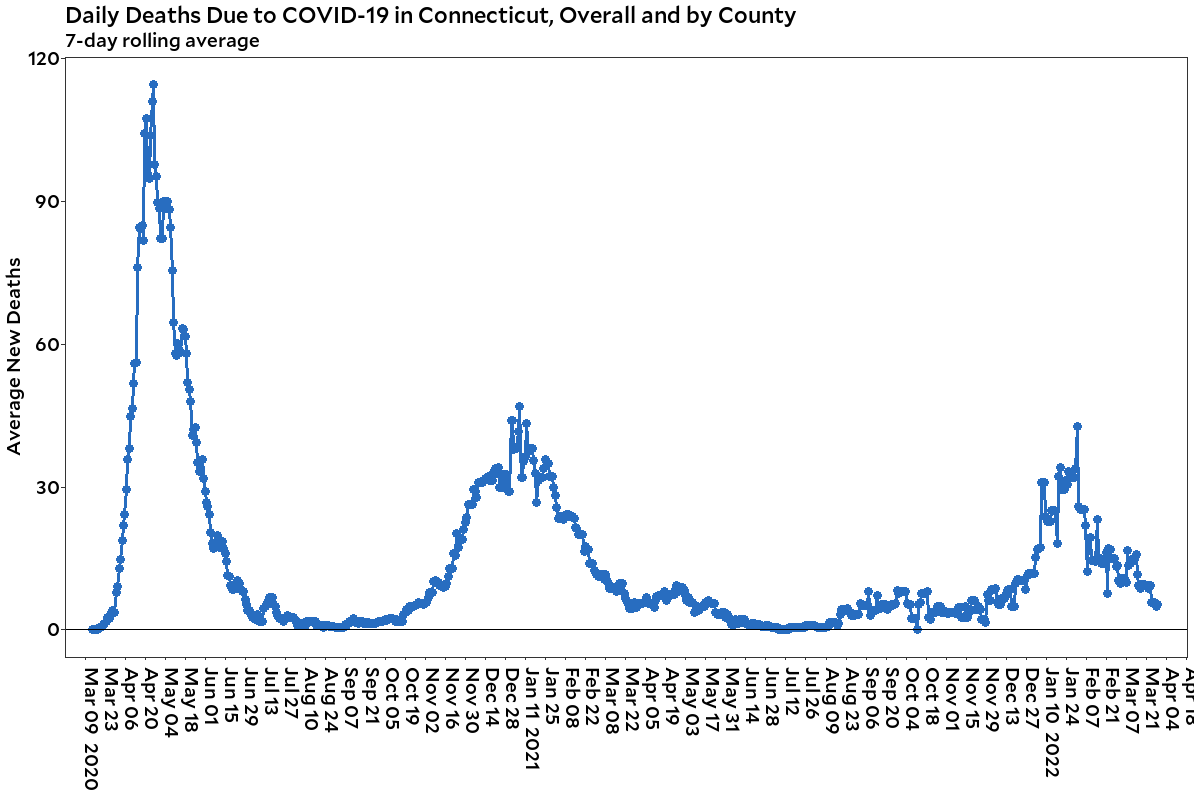 Data primarily sourced from Connecticut Department of Public Health, with data prior to March 24 sourced from the New York Times. Beginning in July, Connecticut began to report data only on weekdays.
View “Deaths in Connecticut” data in a text-based table